Category Archives: A Robinson Crusoe of the Soul

After coming down from my ten performances of ‘A Robinson Crusoe of the Soul’ I launched into looking into ways of staging it in south Wales. This has proved frustrating and glacially slow. I could grow carrots, cabbages and onions, breed and milk my own cows, make and market my own cole slaw, it would be easier and quicker than getting someone, anyone, in the Welsh arts world to give me even the tiniest leg up. I don’t blame individuals, it’s not a great time for the arts anywhere. Austerity, and all that. Brexit, blah blah blah. People have other things on their mind. Frustrated, and trying to keep the Robinson plate spinning, I came up with the thought that I could use the style of that show to create a series of podcasts. The last few years have been very depressing – the UK seems to have become a nation of boring, ultra-conservative, vitriolic, xenophobic philistines in gullible awe of privileged self-serving bullshitters like Rees-Mogg and Johnson. I needed to turn away from it, face a different direction, it was destroying my soul. I wanted to look at this country and find something I love. So I’ve started on a series of podcasts ‘These Weird Isles’ – a journey around less well known parts of the UK, layering memory, landscape, and the work of others who have passed the same way. There’s Batman and Gwen John in Haverfordwest, Peter Cushing in Whitstable, there are curlews and plenty of cheese. Search ‘These Weird Isles’ on iTunes, Spotify, Stitcher or Soundcloud. Or, if you can’t find them there, they’re here.

Filed under A Robinson Crusoe of the Soul, podcast, Wales 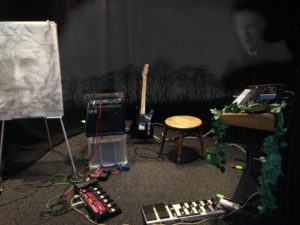 A Robinson Crusoe of the Soul

The venue is booked, the edits complete. I’ve just finished the first full run through, so am beginning to think I may be able to pull this thing off. ‘A Robinson Crusoe of the Soul’ tries to follow the course of Arthur Machen’s creative journey, from south Wales to west London, from the son of an impoverished Welsh vicar, to the writer of weird fiction. To perform the original piece I would have needed at least six musicians. The reworked piece is just me, leaping about, triggering various samples, looping live noises. I play two parts: Arthur Machen and a lecturer who is trying to put Arthur’s life into some sort of context. Arthur gets to wear my grandfather’s old homburg and chews on a antique pipe. He reads a fascimile of the Times from the 1890s. At one point, he conjures a blatant anachronism, a Fender Telecaster, to create the live loops that depict the return of spring, of inspiration, the turning point in the drama, when Arthur realises what he wants to say has been something he’s known all his life.

Filed under A Robinson Crusoe of the Soul, music