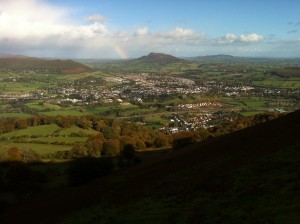 The Art of Wandering

Every Good Friday, when I was a child, friends and I used to walk the ten miles or so to the top of Twm Barlwm, a mountain dominating the reclaimed marshlands of south Wales.  In my imagination, uncorrupted by historical detail, this is where the Celts stood fast, watching over the slow encroachment of Romans stationed in the fort of Caerleon, just below.  It was a mountain of war, and later, in my teens, I witnessed real battles as gangs from nearby towns fought with chains and axes, as determined as the Celts and the Romans not to give an inch.  I watched these events from the safety of the ferns, and sometime later, when the gangs had gone, returned with my dog to wander along the mountain’s spine, to the strange mound at its summit. From there, under the steel grey sky, it felt as if all of the world, and the future, was spread out before me.

Arthur Machen’s Hill of Dreams is a book based on his boyhood love of Twm Barlwm, and Machen’s later work, particularly his London Adventure is a hike through the demi-monde of Edwardian London.  He was a flaneur who perfected the art of wandering.  He wanders London as he wandered the Welsh hills.  When, in my early twenties, I followed Machen’s footsteps and moved from south Wales to west London, I worked hard at being a flaneur.  I loved strolling aimlessly through the leafy suburbs, and in the city I adored the river’s muddy allure.  But I didn’t get to be a seriously good at it, I was Welsh boy in Dr Martens. I didn’t have the style.

After my own decade and a half of London adventure, I moved back to Wales, this time away from the industrial south and into the central wilderness. Here I crave nothing more than to be rambling in the mountains, getting closer to the clouds, and sometimes above them.

I tend to walk with a small bunch of serious hikers. These people have all the kit, the Nordic poles, heavy duty water bottles, stainless steel thermos flasks. They study maps. Some of them have beards.  They are not wanderers, they are athletes. Usually these walks take six hours or so, and often cover twenty miles.  We struggle up steep slopes and spill over and down them again.

We usually start in a car park and at some point manage to find a pub, often an ancient, hidden place, a few dating back to the thirteenth century, some even earlier.  I’ve come upon remote hillside churches with eerie murals, like Death wielding a shovel, or St George slaying what I supposed was a dragon but which looked more like a giant, angry sparrow.  I know the twisted spine of Cwmyoy, and the tumbling, secluded magic of Llanthony and Tintern.

Most of my fellow hikers have travelled this way before, and they know the stories.  Up high in the mountains I’ve seen the wreck of a Wellington bomber that lost its way in the fog; the caves where the Chartists hid their weapons as they planned revolution.  There’s the poet’s chair, and the grave of a famous racehorse. There are standing stones, remnants of Iron Age forts, terraced ramparts, a hermit’s cell.  I’ve looked across the plains of Herefordshire and seen the blue remembered hills of Shropshire.  Look south and there’s the Severn, glinting.

I like writers who are walkers: Rosseau, Wordsworth, Machen, Bruce Chatwin, WG Sebald.  Wandering has a great pedigree. In their books one phrase reappears time after time: solvitur ambulando – you can solve it by walking.  After hiking all day whatever problems you have disappear, and the simple pleasures of sandwiches, or a flask of tea, with the land spinning about you, miles and miles of it, on and on, never ending, whisk all worldly cares up into the clouds, to be lost forever in the vast ancient wilderness.

n.b. this originally appeared in the Awfully Big Adventure Blog.